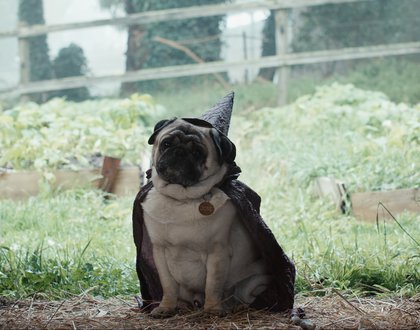 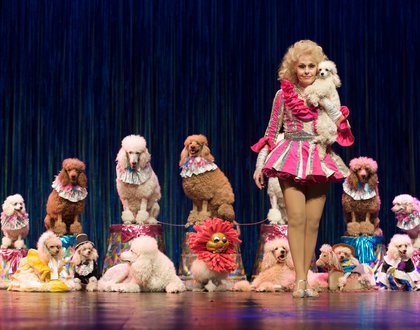 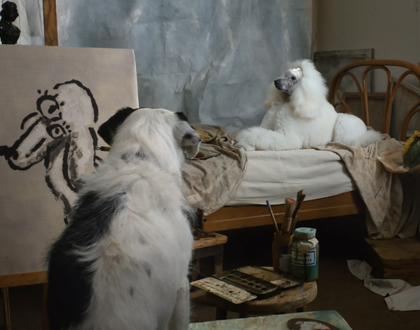 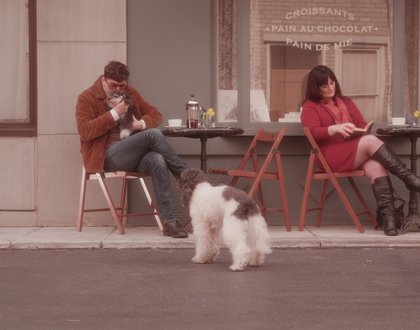 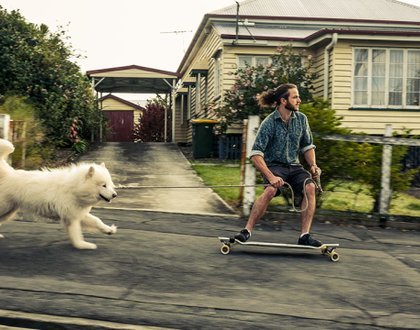 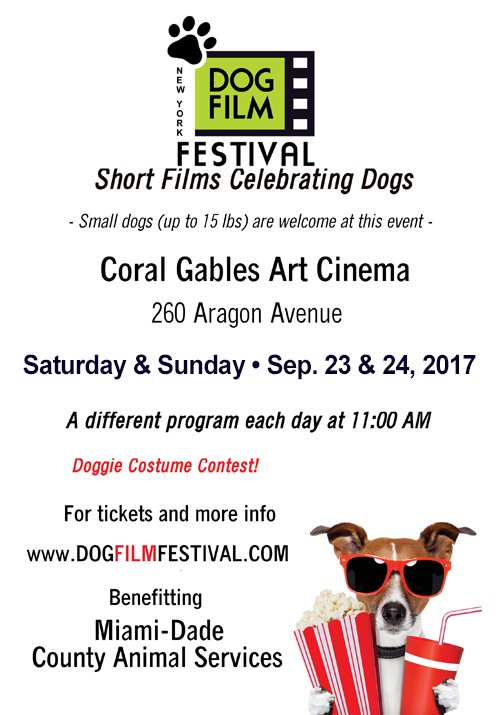 Tickets: Humans $12, Human with a dog $15.00. A portion of every ticket goes to the Miami-Dade Animal Services.

"I’m delighted for animal lovers in the community to experience the many ways that people love and need their dogs, while recognizing the great work of a local shelter in bringing pets and their people together." – Radio Pet Lady Network

Following the overwhelming success of a national tour in 2016, the NY Dog Film Festival™ will be traveling to dozens of cities this year, with a stop in Coral Gables at the Coral Gables Art Cinema on Saturday, September 23rd and Sunday, September 24th. A philanthropic celebration of the love between dogs and people, made possible by a grant from the non-profit Petco Foundation, the Dog Film Festival supports a local life-saving shelter wherever it goes and in Coral Gables a portion of every ticket will benefit the Miami-Dade Animal Services.

Perfect for dog lovers of all ages, the NY Dog Film Festival™ consists of two programs, each of which features a different medley of short documentary, animated and live-action dog-themed films from around the world. The films illuminate human-canine love and are uplifting, with happy outcomes. Each program runs approximately 70 minutes with a completely different program each day.

Small dogs (under 15 lbs.) are welcome in the theater and people are encouraged to dress their dogs up for the Doggie Costume Contest.

HARVEY & HARMONY (1:00) is indescribable!; THERE'S SOMETHING ABOUT MOLLY (7:00) First time British director Sue Carpenter's love tribute to her black Lab Molly; 989 MILES HOME (15:00) Laurence Alexander's student film depicting discarded dogs in South Carolina being transported by volunteers to welcoming adoptive homes in the Northeast; GAME OF BONES (10:30) Director Blaire Dobiecki (Melbourne, Australia) re-imagines the popular television series with a similar name, starring her own rescued Lab, Helen, as the heroine;  CONVERSATION WITH MY DOGS (3:00)  Humorist Merrill Markoe questions why her dogs follow her everywhere;  DAVID & GOLIATH (12:00)  Director George Zaverdas based his period film on a true story of a Jewish resistance fighter fleeing from the Nazis, who takes refuge in a dog house where the German shepherd saves his life; LE SAUVETAGE (6:00)  Peter Mcevilley's faux-French tale of how dogs view us and bring us together –  promoting adoption with the rescued performing Olate dogs. (in French with subtitles); USEFUL DOG TRICKS (4:00) Heather Brook's Terrier Jesse embodies “multi-tasking;” A BOY AND HIS DOG (9:30) Jonna Mciver 's documentary features Owen - a very little boy - whose family adopts Haatchi - a very big dog - and how they make each other whole.

HARVEY DOGS HOME (1:00) indescribably delightful; FOG OF COURAGE (7:30) John R. Dilworth (an Academy Award nominee) made this animated horror/comedy about a cowardly dog named Courage; LOOKING FOR LOVE (3:00) Australian director Blaire Dobiecki stars her rescued black Lab, Helen, in a cautionary tale about looking for love online; THE LEWIS LECTURES (7:30) Merrill Markoe's animated depiction of what dogs actually think and do when we leave the house; DOG YEARS (4:00) Director Sam Hearn's voice-over of a dog who questions his relationship with his frequently absent owner; VALENTINA (9:30) Spanish directors Crespo and Romera's tale of an estranged couple and their Pug Valentina, who brings them back together. (in Spanish, sub-titled); THE POODLE TRAINER (8:00) Vance Malone's character study of a circus trainer, whose performing poodles are the center of her universe (in Russian, sub-titled); DINE IN THE DARK (:30) Jake Shannon, an Australian student, made this PSA for Guide Dogs for the Blind to create empathy for living with vision-impairment; SECOND CHANCES (20:00) Director Steven Latham's film about female prisoners who train dogs from shelters, changing lives on both ends of the leash; PETCO ADOPTION STORY (3:00) with roller blader Bonnie Thunder.