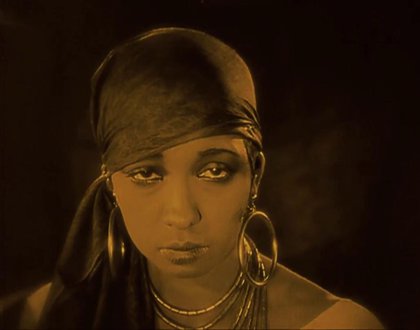 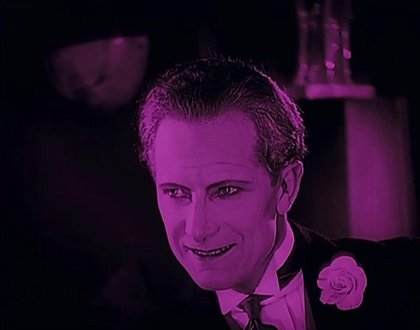 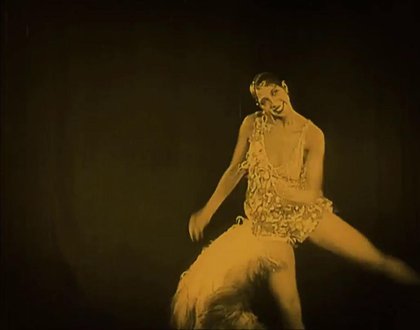 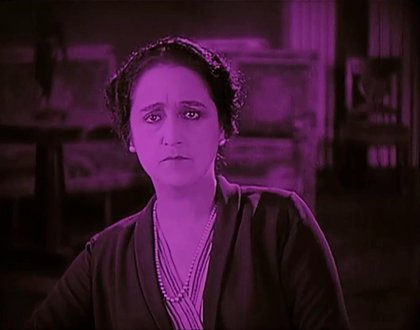 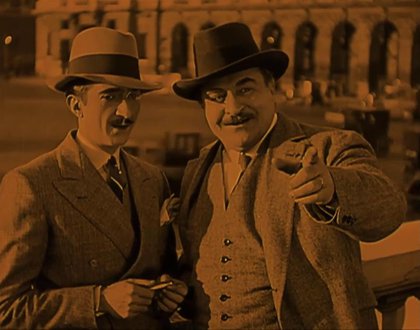 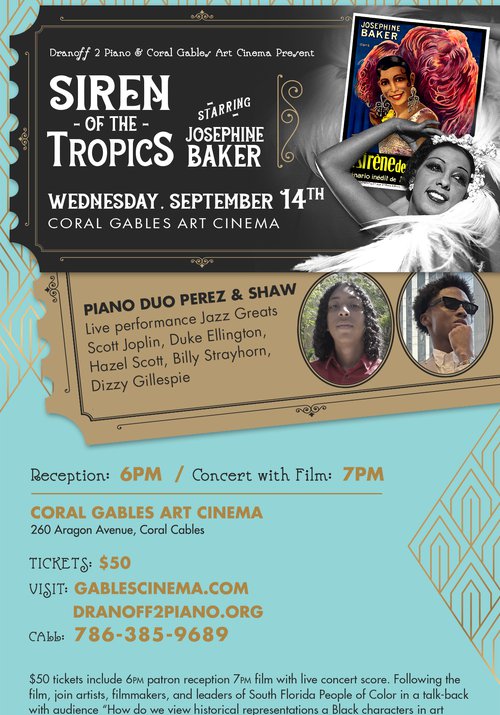 "Baker's labor on screen was a site of great vulnerability while it was the location of her pioneering triumph as the first Black woman to star in a major film before Diana Ross, before Eartha Kitt, before Lena Horne, before Dorothy Dandridge and before gorgeous, saucy Nina Mae McKinney. In the beginning was Josephine Baker." —Terri Francis, Salon

"[Josephine Baker] was a natural actress, adept at both broad comedy and weepy melodrama, and her presence is so vibrant that it often feels she's in her own movie." —Phil Hall, Film Threat

Coral Gables Art Cinema and Dranoff 2 Piano present a live two piano performance and screening of the 1927 silent classic Siren of the Tropics, starring Josephine Baker in her feature film debut. Miami jazz piano duo Angel Perez and Devin Shaw will present their new score, which features the music of Scott Joplin, Duke Ellington, Hazel Scott, Billy Strayhorn, Dizzy Gillespie, and Nina Simone on two Steinway concert grands and original works by renowned jazz composer and pianist Martin Bejerano. The screening will be followed by a panel discussion with on the historical representation of Black artists in the performing arts.

Tickets are $50 and include a reception with food and drinks at 6:00 pm, film screening and concert at 7:00 pm, and panel discussion following the film.

The panelists include: Dr. Terri Francis, Associate Professor of Cinematic Arts and Associate Dean of Inclusion and Outreach at the University of Miami and author of Josephine Baker’s Cinematic Prism; Mo Beasley,Technical Director, Adrienne Arsht Center; and Gentry George, Co-Founder and Artistic Director of Zest Collective.

Josephine Baker plays Papitou, a free-spirited native girl who falls in love with Andre, a sophisticated young man who's been sent to the Parisian Antilles as a prospector—but she doesn't know that he's engaged, or that his work assignment is actually a ruse concocted by his scheming boss. As the truth begins to unravel, Papitou pursues Andre back to Paris, where she takes a job as a music hall performer and fate intervenes.

Though silent, Siren of the Tropics abounds with musical energy by virtue of Baker's innate screen magnetism. Filmed in 1927 when she was still making a splash in Paris as a Folies Bergère star, it established the rags-to-riches fairy tale template from which her subsequent films would be cut and served as the world's introduction to her phenomenal talent—including her signature frenetic "Charleston" dance. It also set the stage for Baker's iconic starring roles in Zouzou and Princesse Tam-Tam, which solidified her status as one of the most important figures in cinema history. Notably, a young Luis Buñuel cut his teeth as assistant director on this film before going on to make his own mark.

This event is sponsored by Miami-Dade County with support from the City of Coral Gables and South Florida People of Color (SFPoC), a 501c3 non-profit organization committed to racial healing and dismantling racism in all its forms–individual, institutional and systemic–through education, dialogue and advocacy across the racial, ethnic and cultural divides.